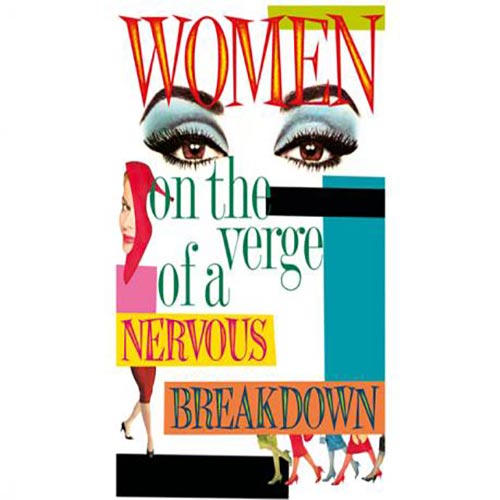 Women on the Verge of a Nervous Breakdown

This story of women and the men who pursue them is a touching adaptation on the verge of all-out musical hilarity.

Women on the Verge of a Nervous Breakdown

This story of women and the men who pursue them is a touching adaptation on the verge of all-out musical hilarity.

This orchestration is based on the Original 2015 UK West End Production.

This show was orchestrated to be player-conducted from the Keyboard 1 book. There are two keyboards both with programming.

Keyboard 1 is the primary piano book and will require a very proficient pianist who can navigate the part and programming while leading the band. Along with acoustic piano, there are several other patches in the programming including Wurlitzer, Fender Rhodes, and various other EP’s.

Keyboard 2 is much more heavily programmed and also requires an excellent player. Some of the sounds and instruments found in this programming include various Organs such as the Hammond B3, Synth elements such as pads, brass, flutes, bells, and harps, as well as Celeste and Accordion to name just a few.

Gazpacho, anyone? A musical adaptation of Pedro Almodóvar’s beloved film of the same name, Women on the Verge of a Nervous Breakdown is the brainchild of the talented team behind Dirty Rotten Scoundrels. Preserving the unusual and exhilarating tone and style of the Oscar-nominated film, Women on the Verge will delight both fans of the film and newcomers to the raucous tale.

Both touching and hilarious, Women on the Verge is a story about women and the men who pursue them… finding them, losing them, needing them and rejecting them. At the center is Pepa, whose friends and lovers are blazing a trail through 1980s Madrid. Along with Pepa, there’s her missing (possibly philandering) lover, Ivan; his ex-wife of questionable sanity, Lucia; their son, Carlos; Pepa’s friend, Candela  and her terrorist boyfriend; a power-suited lawyer; and a taxi driver who dispenses tissues, mints and advice in equal proportion. Mayhem and comic madness abound, balanced by the empathy and heart that are trademarks of Almodóvar’s work.