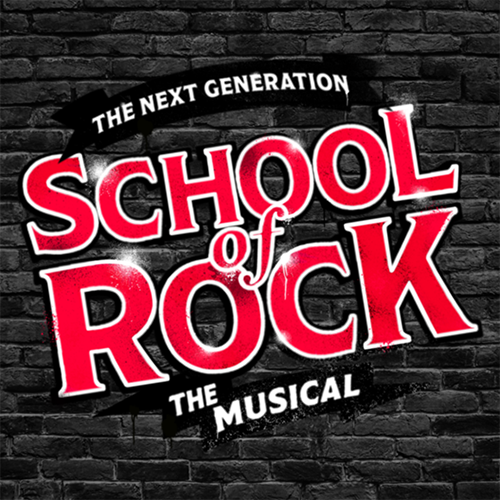 Based on the cult film and with a rocking new score from Andrew Lloyd Webber, School of Rock follows slacker Dewey Finn as he turns a class of straight – A  students into an ear-popping, riff-scorching, all-conquering rock band! As they prepare for the Battle of the Bands, can Dewey make them embrace the empowering message of rock?

Based on the cult film and with a rocking new score from Andrew Lloyd Webber, School of Rock follows slacker Dewey Finn as he turns a class of straight – A  students into an ear-popping, riff-scorching, all-conquering rock band! As they prepare for the Battle of the Bands, can Dewey make them embrace the empowering message of rock?

This licensed version is based on the 2015 Broadway production. However, in an unprecedented move, before the Broadway production even opened, Lloyd Webber granted North American schools and youth groups the opportunity to apply for the rights to perform the show although is is now also available to all groups in North America, including professional theaters.

This show is orchestrated to be stick conducted from the podium. There are essentially two different “bands” which includes the all kids “on stage” band as well as the “pit band”. Per your performance license, the on stage band band must be comprised of kids and teens while there is no distinction for the musicians in the pit band. The pit band has 2 keyboard parts both of which have keyboard programming essential to the show. There is no programming for the onstage keyboardist. KeyboardTEK has worked with both Concord Theatricals and RUG (Really Useful Group) to recreate the original patches from the original production.

Keyboard 1 is the primary piano book but in addition to the various acoustic piano patches many of the other sounds include a mix of orchestral instruments such as woodwinds, strings, and orchestral mallet percussion, and more modern sounds such as basses, guitars, B3 organ, and various analog synth elements. There are over 70 individual patches in the Key 1 part. This book can easily be played by an advanced high school player and is not as technically difficult as many other modern musical scores.

Keyboard 2 has over 50 unique patches and sounds which include synth elements such as basses, synth brass, and pads but also covers the orchestral palette as well with piccolo, horns, strings, and percussion. You will also find piano, various guitars, and both B3 and Pipe organs throughout.

Rock got no reason, rock got no rhyme…You better get me to school on time! Andrew Lloyd Webber’s School of Rock – The Musical is a two-hour, two-act show (plus intermission), based on the hit movie. The tuner follows Dewey Finn, a failed, wannabe rock star who decides to earn an extra bit of cash by posing as a substitute teacher at a prestigious prep school. There he turns a class of straight–A pupils into a guitar-shredding, bass-slapping, mind-blowing rock band. But can he get them to the Battle of the Bands without their parents and the school’s headmistress finding out?

Lloyd Webber produced the stage musical on Broadway and in the West End, penning 14 new numbers for the show, which additionally features all of the original songs from the movie. The composer’s tracks “You’re in the Band” and “Stick it to the Man” are well on their way to becoming rock solid standards, while the finale with “Teacher’s Pet” brings audiences to their feet, eight shows a week.

School of Rock – The Musical, with its sensational live kids’ rock band, is a loving testimony to the transforming power of music.