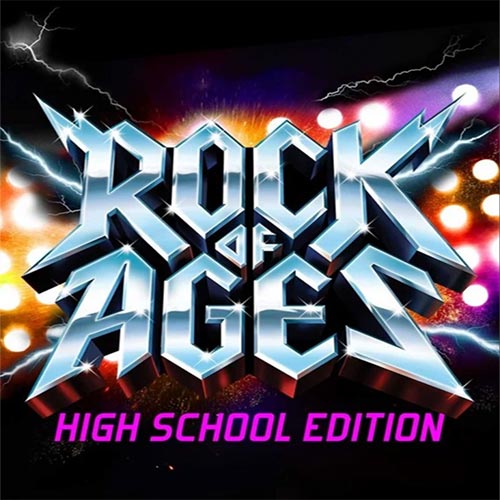 Rock of Ages: High School Edition takes you back to the times of big bands with big egos playing big guitar solos and sporting even bigger hair! This Tony Award -nominated Broadway musical features the hits of bands including Night Ranger, REO Speedwagon, Pat Benatar, Twisted Sister and others.

Rock of Ages: High School Edition takes you back to the times of big bands with big egos playing big guitar solos and sporting even bigger hair! This Tony Award -nominated Broadway musical features the hits of bands including Night Ranger, REO Speedwagon, Pat Benatar, Twisted Sister and others.

This licensed orchestration is based upon the Original 2009 Broadway Production.

There is only a single keyboard player in this show and they also act as the bandleader. The band is collectively known as “Arsenal” and is meant to be onstage since they interact with the cast members. The keyboardist is also the band leader. This show works best if all the musicians have their parts memorized throughout for maximum effect.

The Piano/Conductor book (referred to as Keyboard 1 in the form below) is one of the most fun books in the entire musical theater canon to play but does require an advanced player familiar with the 80’s pop/rock genre who can navigate the part and programming while leading the band. The programming consists of all the iconic sounds in the 80’s songs found in the show. Those include various acoustic pianos, electric pianos, and synths to name a few.

KeyboardTEK is proud to offer Randy Cohen’s original Keyboard programming for your production. This is the exact same file used in the Broadway run and as heard on the cast recording.

It’s the tail end of the big, bad 1980s in Hollywood, and the party has been raging hard. Aqua Net, Lycra and Heavy Metal flow freely at one of the Sunset Strip’s last legendary venues, a place where legendary rocker Stacee Jaxx takes the stage and groupies line up for their chance at an autograph. Amidst the madness, aspiring rock star (and resident toilet cleaner) Drew longs to take the stage as the next big thing (and longs for small-town girl Sherri, fresh off the bus from Kansas with stars in her eyes). But the rock ‘n’ roll fairy tale is about to end when German developers sweep into town with plans to turn the fabled Strip into just another capitalist strip mall. Can Drew, Sherri and the gang save the strip – and themselves – before it’s too late? Only the music of hit bands Styx, Journey, Bon Jovi, Whitesnake and more can hold the answer.

Rock of Ages: High School Edition has been adapted by the author along with iTheatrics to create a version ready for high schools. The unforgettable rock anthems have been adjusted for teen voices and some subject matter has been adjusted for appropriateness. Introduce your kids (and re-introduce the parents) to the face-melting guitar anthems of the 1980’s in this hit Broadway musical.