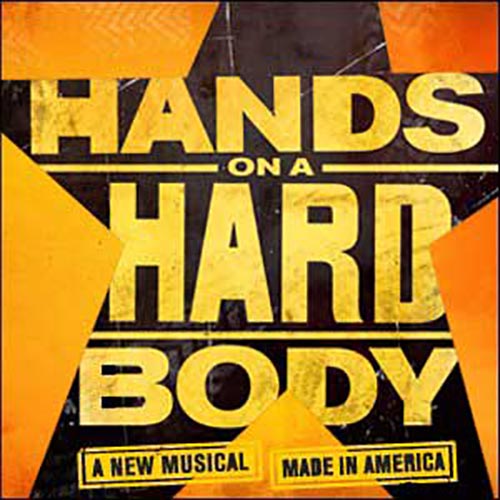 Hands On A Hardbody

10 contestants. 4 days. 1 truck. Inspired by true events, and infused with a "fresh roots-rock vibe," this is the hilarious, hard-fought contest where only one winner can drive away with the American dream.

Hands On A Hardbody

10 contestants. 4 days. 1 truck. Inspired by true events, and infused with a “fresh roots-rock vibe,” this is the hilarious, hard-fought contest where only one winner can drive away with the American dream.

This licensed orchestration is based on the Original 2013 Broadway Production.

This show is orchestrated to be conducted from the Keyboard 1 chair using the Piano/Conductor score. There is also a Keyboard 2 book and both have programming.

The Keyboard 1/Conductor book is the primary piano book but does have some light programming as well. Some of those patches include synth strings, various EP’s, as well as triggering several SFX. This book requires an advanced player who is also capable of light improv at times as the score does have slash notation in certain songs. This player will need to be able to navigate the playing and the programming all while leading the band.

Keyboard 2 has more programming than K1 and adds a unique color and harmony to the rest of the live musicians. Some of the instruments in the programming are B3 Organ, synth, synth strings, Wurlitzer EP, mandolin, clavinet, celeste, as well as the boxing bell SFX to name a few. This player will also need to be able to play contemporary rock/pop/funk/country grooves as well since there is plenty of slash notation in this book particularly on the B3 organ patch.

For 10 hard-luck Texans, a new lease on life is so close they can touch it. Under a scorching sun for days on end, armed with nothing but hope, humor and ambition, they’ll fight to keep at least one hand on a brand-new truck in order to win it. In the hilarious, hard-fought contest that is Hands on a Hardbody only one winner can drive away with the American Dream. Inspired by the true events of the acclaimed 1997 documentary of the same name by S.R. Bindler, produced by Kevin Morris and Bindler.