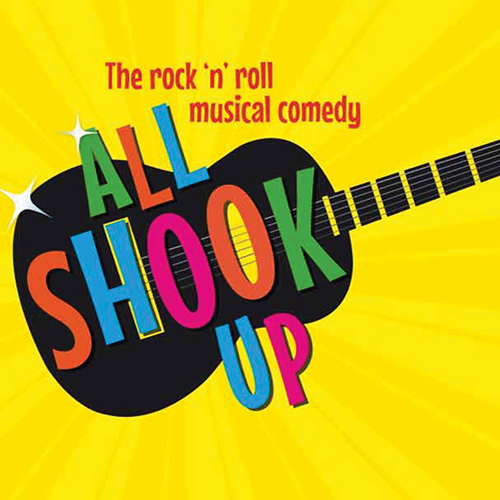 It’s 1955, and into a square little town in a square little state rides a guitar-playing young man who changes everything and everyone he meets. Loosely based on Shakespeare’s Twelfth Night, this hip-swiveling, lip-curling musical fantasy will have you jumpin’ out of your blue suede shoes with such classics as “Heartbreak Hotel,” “Hound Dog,” “Jailhouse Rock,” and “Don’t Be Cruel.”

It’s 1955, and into a square little town in a square little state rides a guitar-playing young man who changes everything and everyone he meets. Loosely based on Shakespeare’s Twelfth Night, this hip-swiveling, lip-curling musical fantasy will have you jumpin’ out of your blue suede shoes with such classics as “Heartbreak Hotel,” “Hound Dog,” “Jailhouse Rock,” and “Don’t Be Cruel.”

This licensed orchestration is based on the 2007 US National Tour which was not changed much from the Original 2005 Broadway Production.

This show is orchestrated to be conducted from the Keyboard 1/PC chair. This book is piano only with no programming. This book will need an advanced player who is comfortable playing classic rock and roll while leading the band.

Keyboard 2 is a B3 Organ book and not a traditional Key 2 synth book although there are a couple of additional sounds such as various acoustic and electric pianos and even a banjo patch. If you are able, it is highly recommended that you use either an actual B3 organ controller or at least an unweighted keyboard as it will be more difficult to play palm glissandi on weighted keys. The original production used an actual B3 with 2 manuals, Upper and Lower, which is what the U and L markings are found throughout the part. If you are playing this part on a single keyboard, it will be difficult to do everything as exactly as it is intended. KeyboardTEK offers a double manual version so please inquire about using that file if you have a double stack manual setup. There will be limitations in a single keyboard configuration but the key is to have fun and do what is comfortable given what you are working with.

All Shook Up explores a small, idyllic town where the townspeople struggle to find what brings them joy or to follow their dreams until a young man arrives with a rockin’ new sound that shakes up their day to day lives. This show is a musical comedy inspired by the wonderful music of Elvis that seamlessly incorporates the lyrics of his songs into a plot which includes elements of Shakespeare’s comedies As You Like It, A Midsummer Night’s Dream, and Twelfth Night. In the words of the book writer, Joe DiPietro, ‘We’re all the same underneath—we all want a purpose, we all want to be loved; everything else is just exteriors. I really worked from the songs first. They’re essentially about being in love, out of love, in some form of love, so the show had to explore love in all its fashions, and when I got the idea of tying that to Shakespeare’s comedies, which really do the same thing, that’s when I got inspired.’”